Bitsboard: An App That Transforms Education

Having been a part of the iPad/iPod/iOS education world for the past few years I have seen a number of good apps and tons of bad apps as well.  Unfortunately, the bad apps, or non-educational ones, seem to heavily outweigh the perfect for education apps.  However, whenever I present to a group of teachers or other educators the most common question is “What are some of your favorite apps?”  Now I completely realize that apps are only one thing that you can do on an iPad, but every once in a while a good app comes along and you just have to share it.  This is the case today with the creation and release of Bitsboard by Grasshopper Apps.  If you are not familiar with Grasshopper Apps, then I suggest you check out their website here.  They are widely known throughout the educational community for having amazing, beautiful, and free apps that are completely customizable.  That’s right - educators of any kind can tweak, change, and add whatever they want to their own app.  At FAIR School Downtown we would add in our own images, lists, and audio.  This has been a huge game changer in our classrooms - especially with spelling words.  Teachers would create their list(s) for the week all ahead of time with images, pictures, and audio over the top and then I would sync the one master iPad with the lists to all the other ones.  Sometimes it would work and at other times the lists would corrupt halfway through the quarter.  It was a great idea, but never reached its full potential. 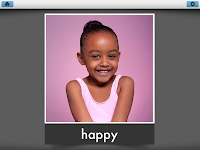 Now the game has changed, finally.  For almost a year now I have been in close contact with Mila over at Grasshopper Apps.  They have been working on an app that allows teachers to create their own flashcards and then share them to their students through a catalog.  No syncing required.  It has been incredible to see an idea that many users wanted transform into a fully developed app.  That’s right, this morning they released the newest, and in my opinion best so far, app called Bitsboard. 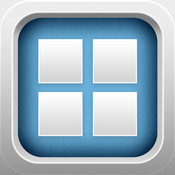 Bitsboard is only about 10% done according to their introduction email, but is is absolutely a game changer in terms of educational apps.  At this time the app has access to over 100,000 flashcards that include pictures and audio, allows you to create new flashcards (see the process below), backup the custom flashcards online, sync and share content across devices, and provides access to lessons from other teachers as well.  Now at this time I totally understand that this is only a app that has customizable flash cards with images or audio, but this is a start.  I personally do not know of another app out there that allows you to create unique, customized content with images and audio, share it with the cloud, have your students download it, and then practice totally without syncing the devices.

Here is how it works:

1.) Download the Bitsboard app on the App Store.
Did I mention that this app it totally free!  That’s right, I get nothing for posting about it and there is no cost to you for trying it out.  Can’t get much better than that! 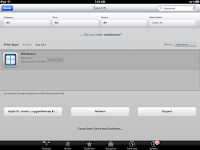 2.) Open the app and land in the “Home Screen” of Bitboard
This is where the pre-downloaded lists are at or where the lists are that you downloaded from the Catalog. 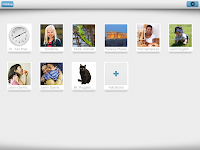 3.) Notice the “Catalog” icon in the upper left corner.  This is where Grasshopper Apps already has pre-created boards that have content in them.  They have also added in some of their more popular apps with the content already added in (Telling Time, First Words, Three Letter Words) at the top.  If you find a list you want to download, click the universal cloud with the arrow down icon and it shows up on your iPad in seconds. 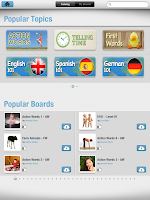 4.) What about actually creating your own lists?  Easy.  Navigate back to the “Home Screen” for the app by clicking the “Home” icon.  Then click the “Gear” in the upper right corner.  We are all familiar with what this icon means, but this time it brings up a few option in the contents.  Click on “Your Boards” and then the “+” in the upper right corner and then “Create a new board.” 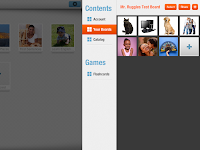 5.) Enter a title at the top where it says “Enter board name here”

6.) Click the plus icon to add a new flash card.  The new flash card comes up and then you can type in the word you want here.  Most words will then also automatically pull in a photo of what you typed as well.  If not then you can choose an image.  In addition, the app may also drop in audio of the word as well, but if not then click the red record button and put in your own audio.  Want to listen to it?  Then click the green plus icon on the other side.  As soon as you are done with one flash card, then click behind on the right and it saves automatically.  Click the “plus” icon and a new blank flashcard comes up here. 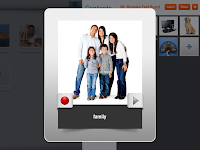 7.) Sharing the set of flash cards (called boards in this app) is almost as easy as well.  Click the “Share” icon in the upper right corner of the app and provided you are logged into Facebook as well the board automatically appears in the Catalog.  The Facebook integration kind of bugged me at first, but then I read some more about this app and the folks at Grasshopper Apps are already working on the ability to create new user accounts without Facebook and they claim that this is coming “very soon.”  Then a few seconds after uploaded the board, I checked in the Catalog and searched for the title of my board.  It was there waiting for me and the students in first grade, or anyone with an iPad and this app, can download and use it.  Absolutely amazing! 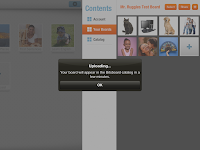 A few things to be aware of about this app from Grasshopper Apps.  First, they are currently in the process of integrating a bunch of their other apps into this one so that it becomes a “one stop shop.”  Coming soon is integration with Photo Touch, Little Reader, Little Speller, and Memory Cards.  They are also claiming to add in a bunch of other pieces to this app so that it is more than a flashcards app.  What that looks like we will see soon.  Also, this is only an iPad app at the moment.  They are actively creating an iPhone version as well.  For more information check out the full posting about this app in the App Store linked here.

Maybe I am only the one that is totally excited about this app, but the possibilities for me boggle my mind.  Teachers can now be at home, create a spelling list, review list, etc. and then have the students download it when they arrive on their iPads at school.  In addition, teachers in the same building or district at the same grade level can all be using the same lists so students learn the same content regardless of the teacher.  Foreign language, special education, and high school biology terms have all been transformed now.  Create a list, share it with your students, and then have them review on their own time and not during precious class time.  This app can also transform the learning and review process at home.  If families own an iPad (or iPhone in the future) they can download this free app and then look for the teacher’s lists for that week.  Then the student can practice and review their school work at home.  No missing paper, lost list, etc. Furthermore, students can create their own lists.  If they consistently have trouble with a few words they can create their own “challenge list” and then add the ones they get wrong each week and consistently practice them when they have a chance.  The possibilities appear endless. 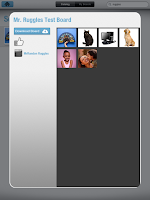 With the understanding that this app is still under development, there are a few things I would tweak.  My largest suggestion at this point, outside of adding in the non-Facebook requirement to post lists, would be the integration of testing and reporting the progress on lists.  Alligator Apps has an awesome app titled “A+ Speller” that allows students to practice their words and then the progress is emailed back to the instructor.  I would love to see some integration on this front so that instructors can track student progress and how they are doing on specific words.  This would be a welcome addition to the app, but I have to say at this point I am very impressed with the ease of use, functionality, and ability to easily share and download content.  Well done Grasshopper Apps!


I would encourage everyone out there to download and try out this app.  It’s free so its not like you are out a dollar or two.  Who knows, you might just figure out a way to integrate this into your classroom/school/district.

P.S. I was not paid or encouraged to write this post about Bitboard.  I am so excited about the potential this app has to transform education that I had to share.  Thanks for reading!
Posted by Mr. Ruggles at 8:12 AM

Randon Ruggles is currently a Education Services Engineer at JAMF Software. He was previously a high school English teacher and Technology Director at the FAIR School Downtown (Minneapolis, MN). Prior FAIR he student taught at Arapahoe High School (Centennial, CO) where this blog got its start. In addition to his work at JAMF, Randon has taught classes for Saint Mary's University of Minnesota in the GPDE program and is currently completing his Instructional Technology masters degree through the University of Northern Iowa. When Randon is not found blogging, tweeting, or checking out new technology, he is usually watching MN Wild hockey, water skiing on the Mississippi River, or hanging out with his wife.
Randon is a Google Apps for Education Certified Trainer.

"Today's education system faces impermanence unless we bridge the gap between how students live and how they learn." – Partnership for the 21st Century Skills